The "big guys" are arranged one after the other like iron armored warriors, with a strict lineup and a shocking scene. This is a scene from a sea port in Shandong a few days ago. More than 200 large-scale equipment from XCMG will start from here and start a new journey.

Loaders, excavators, mining dump trucks, etc., with the start of the lifting operation, one XCMG "heavy loader" was sequentially loaded on a large ocean-going giant ship, the entire loading time only took 43 hours. 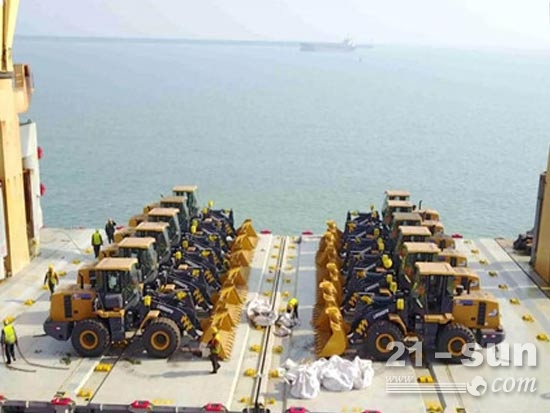 According to the relevant person in charge of the port, this time XCMG equipment was shipped in batches. This is the first time for such a large number of construction machinery and equipment transportation. Xu work is a leading company in China's construction machinery industry. It has a long-standing reputation. This large-scale export to overseas shows the popularity and influence of Xugong products in the international market.

In order to ensure the smooth implementation of this loading plan, the port's production operators carefully prepared, drilled the hoisting process many times in advance, optimized the connection of the operation link, and ensured the successful completion of the loading operation within the time node.

In recent years, with the increasing expansion of XCMG's internationalization strategy, XCMG's brand awareness and reputation have been continuously enhanced. As of October this year, XCMG's overseas exports have steadily taken the leading position in the industry for Chinese brands. Along the â€œBelt and Roadâ€ route, XCMG products have become the first choice brand of construction machinery industry in countries along the route.

The batch shipment of equipment to the sea is the second major marine transportation "aorta" formed by XCMG after the opening of the "Aorta" of XCMG's land transportation by the China-Europe train "Xuzhou". The waves are surging and the sea breeze is learning. Along this "maritime transport Silk Road", more XCMG equipment will be exported to the "Belt and Road" and even all over the world, allowing Chinese equipment that is "inclusive, inclusive, and mutually beneficial" Manufacturing plays a more important role in helping countries in the world! (This article comes from Xugong)

Thrust ball bearings are separable and their limit rotational speed is low.

1.51000 type single-direction thrust ball bearings, this type of bearing can only accommodate axial load on one direction and can control the axial movement on one direction of the shaft and housing.

When the Thrust Ball Bearing is operating, if the applied axial load is too small, the axial direction is not tightly pressed, then acted by centrifugal force, the steel ball will slip and displace and destroy the normal operation of the bearings. To avoid the occurrence of such case, an axial load, Famin must be applied when the thrust ball bearings is working. The calculating formula is:

Minimum load constant A is showing in the bearings dimension table. If the applied axial load is small, a spring must be used to preload the bearing.

The tolerance value of thrust ball bearings is showing in the section [the tolerance of rolling bearing".

WhenÎ±=90Â°,thrust ball bearings can only carry axial load and its dynamic equivalent axial load is: Pa=Fa

See Annex Table 1 for the coefficients of X and Y.

Notes: 1) For Î±`s medium value, use linear interpolation to calculate the values of X, Y and e.

2) Fa/ Frâ‰¤e is not applicable to single-direction bearings.

3) For thrust bearings withÎ±>45Â°, use interpolation method to calculate the value of whenÎ±=45Â°.